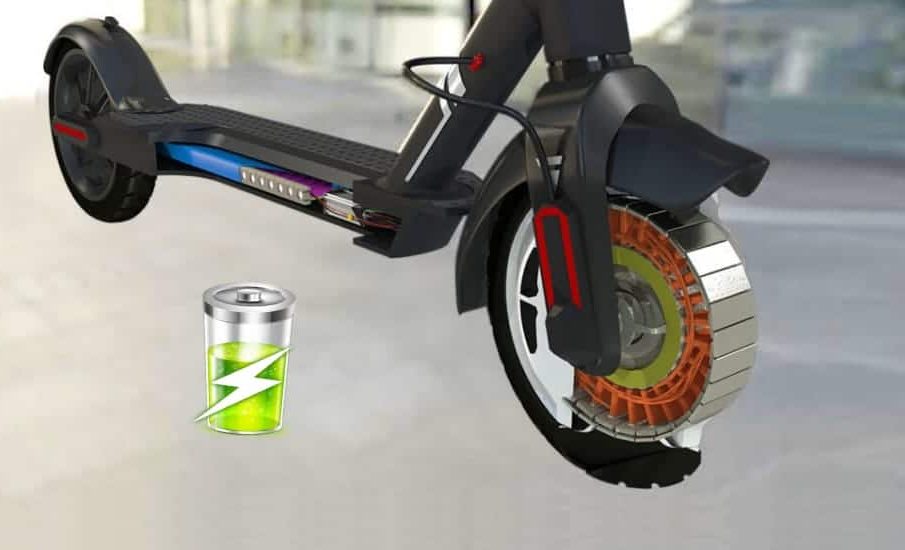 In recent years, electric scooters have attracted attention not only among children but also among adults. An electric scooter is a motorized version of the traditional foot powered kick scooter. Due to its compactness and simplicity of operation, it is increasingly used today. The electric scooter offers easier driving and comfort than the classic motors, but above all the electric scooter is ecological and economical. Electric scooters can reach speeds of up to 40 mph (60 km/h) and can carry a person weighing up to 100 kg or more. Most of the components are made of aircraft-grade aluminum. Therefore, understanding how an electric scooter actually works is an essential thing, and everyone needs to understand.

What Parts Make Up An Electric Scooter

To better understand how an electric scooter works, we need to split it into small pieces and explain each section separately. Of course, each scooter has slightly different components and motor, but all electric scooters consist of the following parts. Therefore, for an electric scooter to work, all these parts must interact with each other. 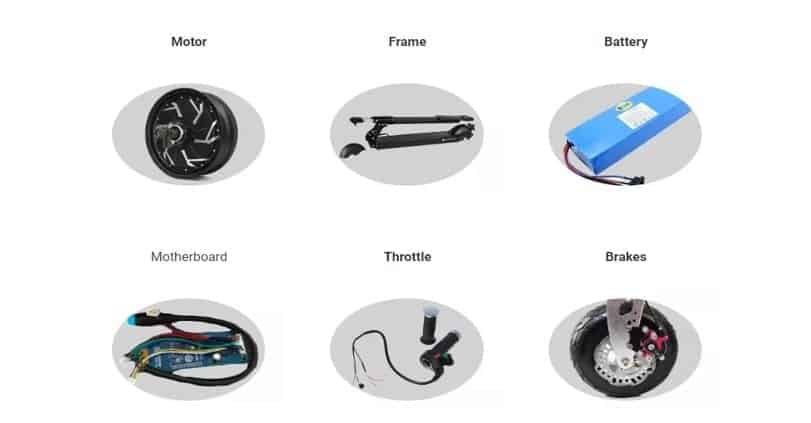 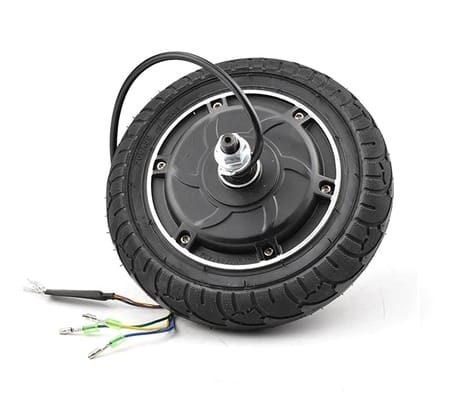 Throttle is the next part that is also important when we talk about electric scooter. When squeezing throttle, you command the scooter that you want to move forward at a certain speed. The pressure level depends on how fast you want to move. After a while, you get a sense of how much you have to squeeze.

When the throttle is pressed, the battery will activate. The energy coming from that battery is connected through wires and transmitted to the motor, which then determines the exact speed at which that electric scooter will move. This information comes from the motherboard and determines the exact speed that the driver has determined by squeezing the throttle. Batteries in electric scooters typically have 500 charging cycles, and then need to be replaced. Depending on the volts you have on your electric scooter, you may have more batteries inside. 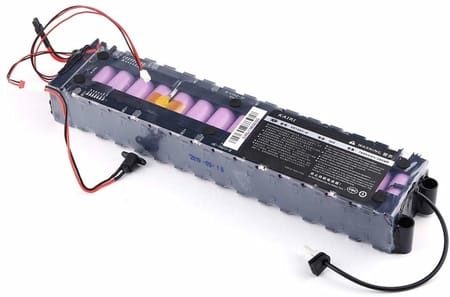 Electric scooters have two types of brakes, the drum system and the disc system. Both of these systems have friction of a surface that is fixed. Brakes are a mandatory part of any electric scooter and should function. Some electric scooters reach speeds of up to 50 km/h and at these speeds the brakes may not schedule because you could be injured. The brakes are actuated on the steering wheel by pressing the lever, generating heat during braking and thus wear. 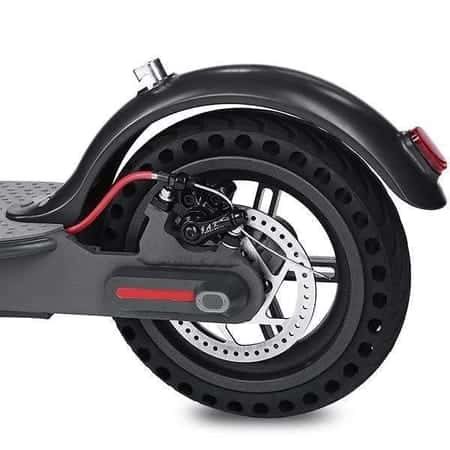 This is the structural part, which holds all the parts of the scooter together and it is usually foldable, making it very easy to transport. Electric scooters are made of different materials, most commonly aluminum or stainless steel. Also, some electric scooters consist of a seat, but most modern scooters do not. Different models have different frames, but when it comes to the most basic parts like this one, there aren’t many extra parts that we can list yet. The weight of electric scooters, of which the frame takes up the most, typically ranges around 24 lbs (10 kg). 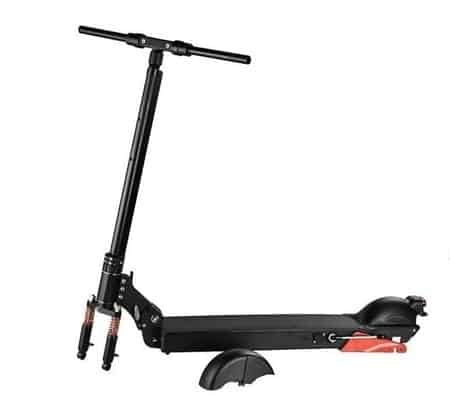 How An Electric Scooter is Handled?

Now that we have gone through all the parts of an electric scooter and how it works, it’s time to learn how it is handled. By that I mean, how do you get on, how to gain speed, how to slow down and how to get off.

Using an electric scooter is much easier unlike to hoverboards, skateboards, electric bikes etc. The first thing you need to do to start riding it is to put one foot on it, and then push it slightly with the other foot to give you momentum and balance. Most electric scooters have a built-in mechanism for the engine to start automatically after pushing off. Once the engine has started, you can raise the other leg and place it on the electric scooter.

2. How to Get More Speed With An Electric Scooter

The same way electric bikes have a handlebar to adjust the speed you want to move, so do electric scooters have a handlebar what you can rotate to determine your speed. The more you rotate it, the faster you will get. Be careful when increasing speed, as you may lose balance and fall.

This is a pretty easy part, but you should be careful when moving at high speeds. What you need to do is press the handle located on the handlebar. As electric scooters differ, you will come across types of scooters that have front and rear brakes. At high speeds, brake lightly and do not squeeze abruptly.

After reaching your destination, slow down slightly by pressing the brake on the steering wheel. After stopping, gently place one foot on the ground and lower with the other foot. It is advised that this be your right foot first, as this will give you better stability when coming down.

5. How to fold the frame of an Electric Scooter

Most of today’s electric scooters have the ability to fold, which is quite useful when you arrive at your destination and want to bring your scooter with you to the office or at the gym. Such a system where you can fold the frame will depend solely on the model of the scooter. Most of them have a push system that you can use, and it’s very simple. This will save a lot of space wherever you store it.

How Does the Battery Run the Electric Scooter? 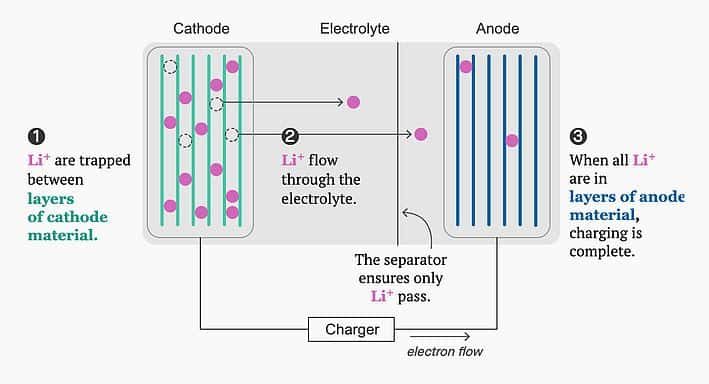 Each battery consists of three basic parts: the anode (which is negative), the cathode (which is positive) and the electrolyte between them. Lithium-ions move with the help of electrolytes, which gives them this movement property but lacks electrical conductivity. There is another layer inside and it is called a separator. During the discharge process, anode oxidation occurs, which causes the lithium atoms, which are then adjacent to the boundary connected to the electrolyte, to be discharged into the valence band at that moment. At the feeder that is fed from the outer circuit, the released electrons leave, while at that time the positive lithium ions move through the electrolyte through the cathode. While this process is taking place, lithium ions join us at the cathode together with electrons from the outer circuit. To prevent short circuits occurring between the anode and the cathode, we use a separator. The separator has the ability to leak lithium ions.

The Main Benefits of Electric Scooters

They are silent, non-polluting and economical. This are some of the advantages of having an electric scooter. Apart from a very slight acceleration noise due to the energy supplied to the motor by the batteries, the electric scooter only emits a very low sound on the way. This one makes it possible to realize that the motor turns well round, but not more. There is no longer any question of rousing the whole neighborhood or waking up all the people around you when you are leaving in the morning. Its silence quite amazing and could be said to be quite confusing during the first uses, but what comfort in use!

Electric scooters must not drive faster than 15mph (25 km/h) and should never be used on sidewalks. The driving characteristics of the electric scooter are similar to that of a e-bike. For this reason, the same rules should apply to them as to bicycles. You are only allowed on bike paths, bike lanes and bike roads. If they are not available, they can go onto the road, even outside of built-up areas. The scooter must be equipped with two independent brakes and, like a bicycle, must have lighting – although the lamps may be removable. Also a bell – or alternatively a signal that is clearly warning.

Scooter drivers must give absolute priority to pedestrians on combined cycle paths and footpaths. Pedestrians must not be hindered or endangered. If there is a danger, ringing is not enough. Rather, the drivers must immediately ensure that they can brake in good time when they recognize a possible danger situation.

How Fast Can Electric Scooters Go?

Electric scooters have become so popular that it is almost impossible not to see them on the street today. If you want to get to your destination quickly, easily and effectively, this is the ideal vehicle. In this article, we describe in detail what each electric scooter have and how it works. Now that you’ve got a better insight into this new technological, it might be time to buy one for your needs. If I left out something or you would like to add, feel free to write below in the comments.