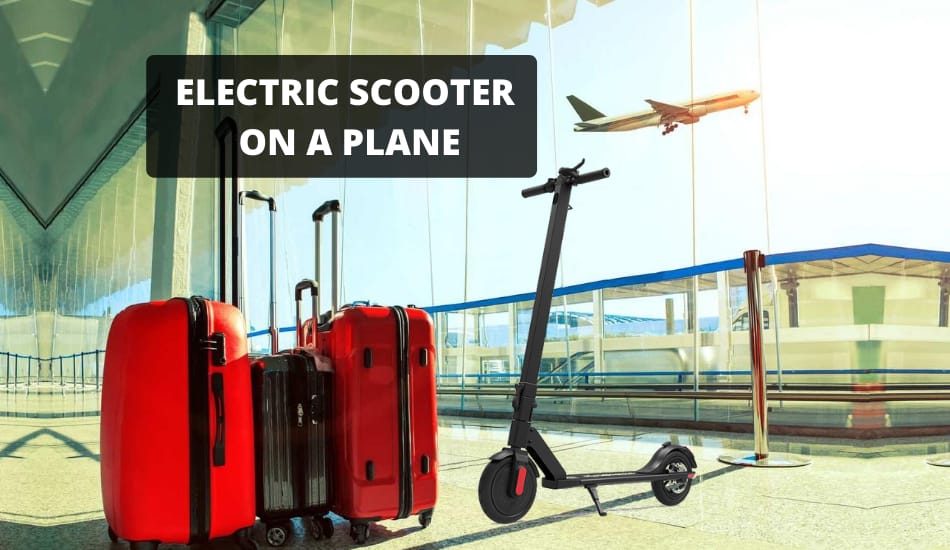 So Can I Take My Electric Scooter On a Plane? Some airlines have generally banned electric scooters on a plane while others have precise guidelines for taking them on. The decisive factor for a ban or permission to take your e-scooter on a plane is the performance of the battery which is measured in watt-hours (Wh) and must be below 160 Wh.

Most European airlines have strict rules and guidelines on the type and size of batteries that can be taken on board. The FAA also has strict regulations and allows only batteries up to 100 Wh (cabin or checked), while for cabin luggage batteries between 100 and 160 Wh can be transported, which also depends on airline policies in which you fly. Batteries that have more than 160 Wh are prohibited and cannot be brought on board the aircraft.

Each airline has different rules. Most airlines require you to have a battery below 160 Wh to be able to transport your electric scooter. This is because of the risk of fire by the lithium-ion batteries. Airlines that allow the transport of electric scooters look at the battery type and capacity.

Most popular Airlines and Regulations for taking electric scooters on a plane:

The IATA Rules On Flying With Electric Scooters

The International Air Transport Association (IATA) has a special rules on taking electric scooters in a plane. So, how to check if your battery is allowed to be taken on an airplane? In order for all users to know exactly all the rules they need to follow, IATA has the answer to three scenarios:

How to Check if Your Electric Scooter Can be Carried on a Plane?

Battery Label: Each electric battery has a label that clearly states the power it has. That label is mostly located on the battery itself, and in addition to power, other parameters are printed, such as Ampere-hours (Ah), battery type, manufacturer and other specifications. In the picture we can see what a battery label looks like on which the parameters that interest us are clearly visible. The battery should not have more than 160 Wh, as stated on the label. 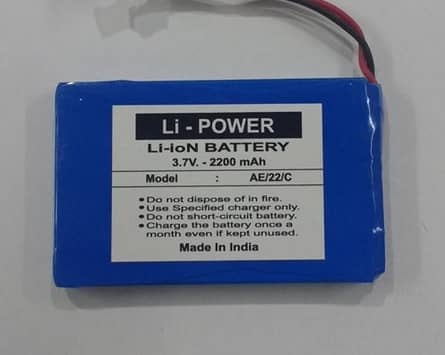 Charger label:  As you can see in the picture, the charger also has parameters which you must adhere to. In this example you can see the output of 41.5V and 3A current that is always higher than the battery itself. When we talk about 3A, it means that the max current is going to the battery from the power source. Every charger can be transported because it has no energy stored in it. 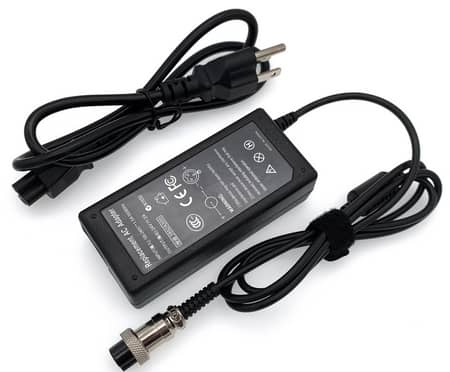 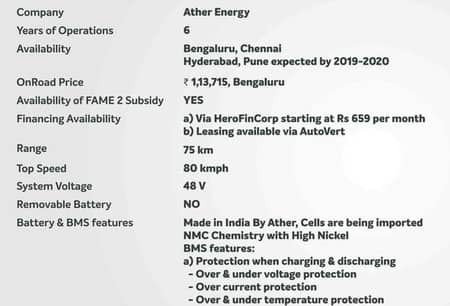 Which Batteries Are Problematic?

Smartphones and laptops have rechargeable batteries with an average output of 100 watts. These are considered as “consumer electronics” and are known to be allowed on board. Electric scooters with higher performance, on the other hand, could be classified as problematic so you need to get approval from the airline.

Most airlines require you to have a battery below 160 Wh to be able to transport your electric scooter. The maximum battery size that laptops have is 160 Wh, so this rule is designed primarily for laptops, rather than for e-scooters. Most batteries have a pronounced state in ampere-hour, so you need to convert it to watt-hours. For those who want to know more, check: Electric Scooter Batteries: Ultimate Guide

Either way, the built-in lithium-ion battery must be tested according to UN38.3 and have a corresponding test sticker (label).  For example, the manufacturers of the EGRET ONE electric scooter offer on request to submit a corresponding “Battery Safety Datasheet” as well as the passed test.  In this respect, it is worth contacting the e-scooter manufacturer before departure.

The FAA’s Rules For Passengers And Battery

Protect Your Electric Scooter From Damage 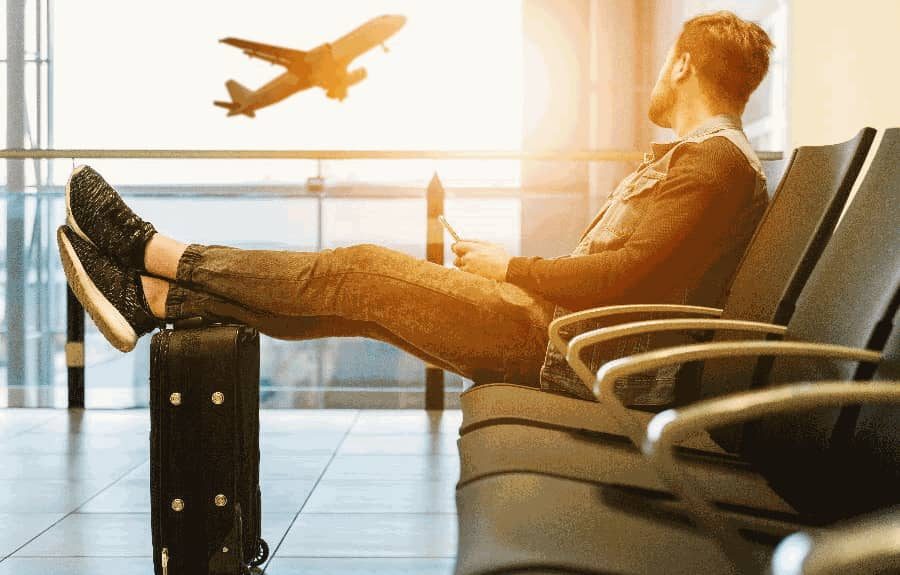 Upon arrival at the airport you need to check-in your electric scooter. The first thing you need to know is that one of the airline staff members will be in charge to take your e-scooter to the aircraft hold. To protect your scooter from damage, turn it off and, if possible, secure it from being turned on again.

Some electric scooters can be folded and put in a bag. So try to protect it by putting it in a bag. It is recommended to discharge the battery during the flight and remove it from the scooter. This way you will be sure that some unforeseen scenario will not happen. Airlines may charge you extra charges if the bag size is above the average, so you need to keep that in mind.

How to Carry a Scooter on an Airplane

An electric scooter is transported in airliners under different conditions. When planning to take a scooter on board, be sure to check the requirements of the airline. Several years ago, the International Civil Aviation Organization created a document introducing a ban on the carriage on board aircraft of any devices operating on lithium-ion batteries (classified as explosive). It should be noted that all the demanded equipment – mobile phones, cameras, laptops, etc., works on such batteries. This decision was not approved by the competent authorities.

(If you want to know more about batteries, check out my latest post: Electric Scooter Batteries: Ultimate Guide)

When someone is preparing for a flight, there are certain rules that he must follow and the procedure it must go through with the airline representatives. There are two ways he can do this: by phone or at the airport.

The passenger must describe their vehicle:

All of these points play an important role. Sometimes it happens that when transporting an electric scooter or some other fragile equipment, the item is damaged during the flight.

Most Popular Airlines And Their Rules For E-Scooters 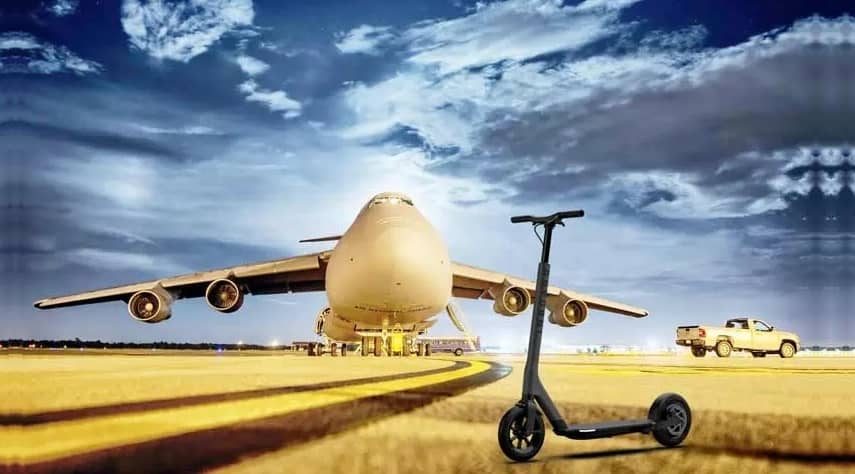 The Utair permitted the transportation of electric scooters that are powered by lithium-ion batteries on the aircraft of this carrier by prior agreement. A passenger wishing to transport an electric scooter on board must obtain an official permission from the carrier and fulfill all the conditions regarding the packaging of equipment for the duration of the flight.

The Ural Airlines has officially banned the transportation of any mobile devices as well as electric scooters that are powered by lithium-ion batteries on aircraft. When planning to transport an electric scooter on an airliner, be sure to check the conditions and requirements for the carriage of such devices with the representatives of the selected airline. This information can be found on official resources or in the call center by calling the hotline.

In China, the upper limit for batteries is 7.5 Ah (160 Wh), and two more, similar reserve batteries are allowed to be carried. Even if, when the plane leaves for another country, the traveler has not encountered any problem at check-in with their 300 Wh batteries, but they descend to China or check-in there again, there is has a high probability that these batteries will be confiscated. Passengers in transit also go through very tedious security checks.

The Emirates also allows the transport of scooters. For folding mobility scooters and e-scooters using lithium-ion batteries: the lithium-ion battery must be removed from the scooter and carried in the cabin. These batteries must not have a capacity greater than 300 watt hours (Wh) if the mobility device is equipped with a single battery. If the device uses two batteries, they should not exceed 160 Wh each. One additional spare battery (up to 300 Wh) or two spare batteries (up to 160 Wh each) are permitted and must also be carried in the cabin.

The Air Asia allows the transport of electric scooters. The capacity of the lithium-ion battery cannot exceed 300 Watt hours (Wh) for mobility aids using a single battery. For devices using two lithium-ion batteries, the individual capacity cannot exceed 160 Wh each. When it comes to extra spare battery it must not exceed 300 Wh, or if you have two spare batteries, they must not exceed160 Wh each, may be carried in the cabin and must be placed in a case provided by the manufacturer.

The Delta Air Lines allows you to transport electric scooter but they require the law to inspect and disconnect the battery from the scooter. Delta staff must inspect the battery and approve it for travel. The customers will be allowed to take two spare batteries on the airplane if they are less than 160 Wh, or if they have one spare battery that is less than 300 Wh.

Many times passengers know to ask whether electric scooters can be transported on an airplane. To clarify whether you can transport an electric scooter on a particular plane, you need to look in advance on the carrier’s website or call for inquiries. It is possible to transport a vehicle such as an electric scooter on an airplane, but a large number of rules of various airlines and the differences in their internal policies make you constantly contact the customer support center to clarify all the necessary nuances.

Some airline companies allow electric scooters, but with a cover. It is also possible to buy a separate ticket, although this option is more expensive. You need to know that sometimes electric scooters can have more problems than any other electronic device. For example, many airlines have different rules when transporting electric scooters, and in some countries, it can be punishable.

Before transporting an electric scooter on an airplane, do the following:

When transporting electric scooters, it would be desirable for your scooter to be foldable. This allows easy storage in a cabin with limited space. Also another problem when transporting is the width of the scooter. Some airlines have a policy to charge things like that, so you have to be careful and ask the airline company what the conditions are for transporting.

Tips & Tricks: Remove The Battery If You Can

Anyone who has an e-scooter with a removable battery is definitely at an advantage. Some airlines also require that the battery be removed before departure and that it be carried in a special container in the cabin. Anyone who has the option of removing the battery from the e-scooter should do so before the security check and inform the security staff about taking them with them.

We could see in this article that most airlines in Europe (Lufthansa, Qatar, etc.) are not allowing you to take an electric scooter on the plane, while most American and Chinese airlines allow the transportation of electric scooters where the battery does not exceed 160 Wh. Most e-scooters are classified as dangerous goods due to their lithium-ion batteries, as the energy storage device could catch fire or explode, and this is the main reason why most companies ban their transportation. Therefore, as one of the solutions is that you can rent the e-scooter while on vacation. I hope we helped you with these informations, and feel free to write down in the comments section if I left something out.