Electric scooters surprised the world with their high demand. This all started out as a toy for children and has grown into a means of transportation that uses people across the globe. Scooter as a means of transportation and entertainment is familiar to almost everyone. With its high popularity, it is quite normal today that an increasing number of people are asking about their options and what they can do. Also one of the questions people also ask is whether electric scooters are waterproof and can they be used in the rain?

How to Choose An Waterproof Electric Scooter?

When choosing a waterproof electric scooter, one must pay attention to some characteristics such as material (stainless steel), motor, battery power, brake and wheels. There are some things to understand when using an electric scooter during the rain. The first thing is that water can affect electronic components inside your electric scooter. With low-cost electric scooters available on the market today, they do not have shielded electronics, so most of the parts are outdoors and the water can be drawn in very easily. So special attention should be paid to this.

An Overview of All Important Electric Scooter Features: 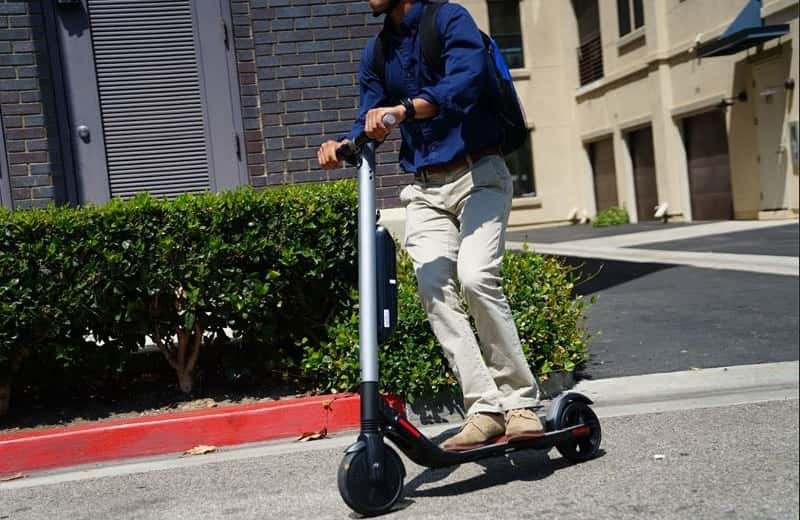 Ninebot KickScooter ES4: This scooter opens our rating of the best waterproof electric scooter for adults Ninebot KickScooter ES4. In its lineup, a model with a four in the index is considered the top one – the most powerful engine (800 W), which means the highest speed. The ES4 electric scooter can accelerate to 30 km/h, although the power consumption will be high at that speed. The branded feature of this series is that the batteries and controller are not installed in the floor, but are hidden in the steering rack. This actually gives its plus: there is no risk of damage to the electronics or short circuit when moving puddles, and not everyone will like to stomp on batteries.

The second feature is the presence of a connector for an additional battery, which is mounted on the same rack. This battery is connected to the main charging socket, covered with a rubber plug. A good solution: without a “collective farm” you can seriously increase the power reserve. Both wheels of the scooter are 200 mm, front and rear there are shock absorbers. Together, this allows us to talk about some kind of comfort when riding, as far as it is possible for a scooter.

Xiaomi M365: First of all, it’s nice that the manufacturer has simultaneously increased both engine power and range. If previously the scooter was giving out 500 Watts at its peak, now it’s 600 Watts, and the nominal power has accordingly grown from 250 to 300 watts. At the same time, the range has grown much more decently – from 30 to 45 km, this is as much as a fifty-percent increase! Which is not surprising – the scooter, which gained 1.7 kg in weight, gained this “fat” almost completely due to the recycled battery pack, which now has a capacity of not more than 280 watt hours.

It’s nice that the brakes are also improved: the diameter of the brake disc has increased from 110 mm to 120. The drive mode selector has changed – if earlier it was a two-position (“eco / sport”), now it has a separate mode for normal driving “Drive”, which, if desired, can already be made quicker by switching to “sport”, or save a charge in “eco”. Given the increased motor power, the use of an advanced selector is especially clearly visible.

Airwheel z5: The electric scooter is distinguished by its design, except that it is resistant to rain: it is supposed to stand on it not like on an ordinary one (one leg in front, the other behind), but with legs resting on the side platforms. In principle, this is convenient – here you do not need to constantly push off with your feet. The battery pack was not placed either in the column or under the floor: the box is mounted at the junction of the steering wheel and lower frame. In principle, this is not bad: the legs do not bother, the center of gravity is lower, and the protection is better than for models where the batteries are tucked away. Moreover, the battery is easily removable: you can buy a spare and not be afraid to “dry out” on the road.

The motor power is 500 watts, but the scooter is not one of the fastest: its maximum speed is limited to 20 km/h. But there is a USB port that turns the electric scooter into a self-propelled power bank for your gadgets. Well, for that we give the Z5 ten out of ten hipsters. The front fork – with two shock absorbers, which is good news. Moreover, the diameter of the wheels is only 8 inches. By the way, by the way, the wheel is not pneumatic, but solid-cast: there is less comfort, but reliability is greater. The brake is either a single drum on the rear wheel, or additionally there is a front tick. 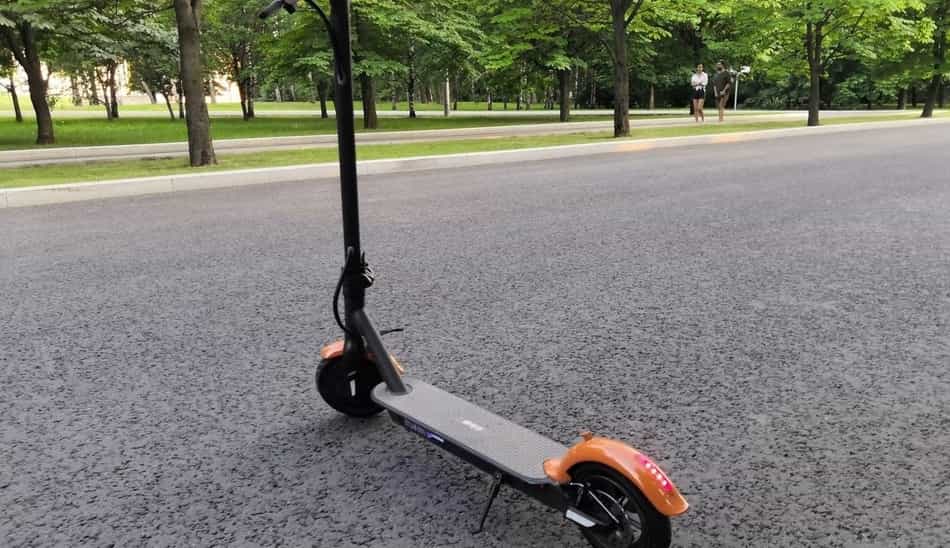 HIPER Triumph: The lightweight, not very conspicuous electric scooter on an aluminum frame is not striking in its characteristics – the motor develops only 250 watts of power, and the mileage on one charge of the battery assembly with a capacity of 7.5 Ah , so this scooter can reach speeds up to 30 km/h.  However, wheels with a diameter of 8.5 inches will not be allowed to move out of level tracks in the absence of suspension. But let’s not forget about the merits – first of all, it is a decent water protection, which many electric scooters have problems with.

Three modes of movement, they are chosen out of love for minimalism by successive presses of the power switch, rather than a separate button. In the “economy” mode, the scooter is slightly faster than a pedestrian, the speed is limited at around 8 km/h. The “moderate” mode is already more interesting – here the ceiling is twice as high, 16 km/h. And finally, the third press will turn on the “sports” mode, in which the scooter accelerates to the maximum. And yes, traditionally pay attention to the folding unit – the manufacturer not only specifically noted this point in the instructions, but even put spare bolts in the kit.

Globber One K E-Motion: If you use the electric scooter only for short trips, and you also want it to be waterproof, the convenience of carrying and storage is more important for you than the dynamics of acceleration or power reserve, so pay attention to this model. With a weight of only 10 kilograms, this scooter folds quickly and easily (while the reliability of the folding mechanism is higher than that of cheaper models). It is enough to press the pedal with your foot – and the light deck along with the rear wheel will automatically rise, clinging to the steering rack.

The power of the motor is only – 250 Watts. But the battery for 5.8 ampere hours is more or less enough for him, especially if you switch the scooter to “slow” mode with a speed limit of 6 km/h. In the “fast” mode, you can accelerate it to 25 km/h. I am glad that the manufacturer did not stint on a mechanical brake, although with such a mass and power one could also expect a “wing-brake”.